Fluke 101 and Fluke 107 are digital multimeters from the 10* series. They are intended for use by beginners or for use as backup multimeters for professionals. If used in a way described in the previous sentence, they will do their job nicely.

They are not suited for any type of more demanding use because they have only the basic functions.

I will compare features of these multimeters by having their price range and type usage they were designed for in mind since they are both designed as simple backup or as multimeters for beginners. 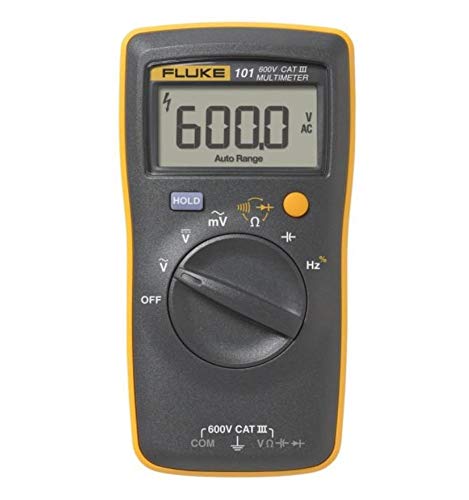 Built from reinforced plastic that will handle medium amounts of force.

Easy to use. Simplistic design, excellent for beginners. 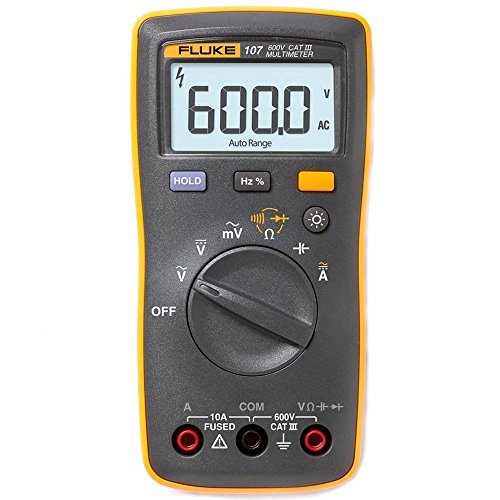 Easy to use. Has more features that are packed in nicely. Intuitive design.

Quality of build is very important when it comes to multimeters because they need to be able to withstand serious amounts of force and still be able to work accurately with all of their functions unimpaired.

It is the standard feature when it comes to multimeters to have either a rubber shell on the outside or tough, reinforced plastic on the inside, most often the casing itself  is built from strong plastic.

People usually expect that their multimeters will be tough and sturdy or at least have a tough rubber shell since rubber is not very expensive. If a multimeter is light, a casing made of reinforced plastic will do.

Size also matters, when observed in a context of the purpose of the multimeter.

Fluke 101 is a compact, lightweight multimeter that will fit nicely in your pocket and in your hand.

Although Fluke 101 doesn’t have rubber shell on the outside, it was built from nice plastic that will protect it from low to moderate damage quite well. The outer shell can sometimes be slippery, so that can be bad if your palms can be sweaty.

Fluke 107 is larger than Fluke 101, but it is still classified as a compact multimeter because it can fit in your pocket too.  Fluke 107 doesn’t have any rubber too, but when you take it into your hand you can get a better feeling for the plastic casing that is thicker in this case. This multimeter is not slippery, although they could have done something to add a little more grip.

Accuracy is the most important feature when it comes to multimeter’s functionality. Although it is unreasonable to expect backup multimeters to have true RMS feature, both of these multimeters are more accurate than other products in this price range.

If you decide to get one of these multimeters, you can be certain that they will measure things as they should and that you will be happy with the readings they produce.

This multimeter is shipped with a manual that gives you detailed instructions on calibrating Fluke 101. Fluke 101 is accurate when first bought, but its accuracy level is at the level of other multimeters on the market in this price range. Accuracy will be set up to Fluke’s standard after you calibrated it.

It is not necessary to calibrate Fluke 107 because it produces accurate measurements from the moment you buy it. In the case that you do decide to calibrate it like the manufacturer recommends, its level of accuracy will rise up to the next level.

Models aimed at beginners usually don’t have any safety certificates like CAT III and IV, and fuses are usually of bad quality, but since Fluke manuactures these multimeters, you can relax because they took care of  everything.

Fluke 101 is CAT III certified up to six hundred volts, but it contains no fuse.

I can understand that decision since it can’t measure amps, but nevertheless, the manufacturer should have built a fuse in because Fluke 101 can measure volts.

In the case that it breaks down, you can replace or repair Fluke 101 within one year after you bought it since it comes with a warranty.

Fluke 107 is intended for use by electrical technicians. Unlike the 101 model, Fluke 107 can measure amps.

The manufacturer has decided to build the fuse in this multimeter, alongside the CAT III certificate that can handle up to 600 volts of juice.

Ease of use is not a factor if one of these multimeters is to be used by experienced users as a backup, but if they are to be bought by new users that plan on using them for practice it should be counted in when making a decision.

To cut straight to the point, Fluke 101 can measure basic features only and it is easy to use. I find that excellent because the manufacturer could have easily tried to make those basic features more complicated in order to appeal to inexperienced buyers that would not have been able to recognize this in time.

This multimeter is easy to use. Although it has a couple of features more than Fluke 101, like the back light, hold setting, and frequency percentage setting, Fluke 107 is just as easy to use as Fluke 101. This should appeal to beginners the most, as they will get more settings for the same level of ease of use.

I have to pronounce Fluke 107 as the winner of this comparison. It’s the amount of features and simplicity simply overwhelm what Fluke 101 has to offer.