Fluke 179 is an electrical multimeter with a temperature measuring ability. It is a multimeter from one hundred and seventy series of multimeters and is the most advanced model in terms of precision and the number of functions in its series. The one seventy series is a series that is over a decade old and it has been improved several times in terms of materials and quality of build.

This multimeter is one of the safest on the market, both in the sturdiness of build and in all the certificates it is holding like CAT III and CAT IV certificates. 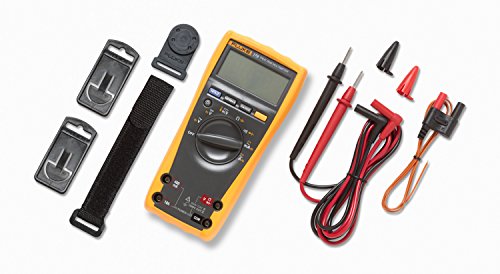 The one seventy series are created to be the entry-level series for electricians and technicians, more specifically, the Fluke 179 model was created for this type of user, but with an addition of a temperature measuring ability. The ideal user is someone who is new in electronics and similar branches of work or someone who is a trainee in those fields and is looking for a quality multimeter for an affordable price.

The price is changing almost all the time, such an increase in price can be the result of the manufacturer simply wanting to pump up the price because of the high market demand or it can mean that they have upgraded the original model a lot and are trying to compensate with the price.

Manuals are highly detailed and I recommend that you read them before use because they will let you know how to do a safey inspection of your multimeter to check if it was damaged in transport.

It is highly unlikely that Fluke 179 can be damaged in transport because the box is very sturdy and the multimeter is enveloped with a tough rubber glove which makes it resistant to kicks and falling. The multimeter is made of reinforced plastic and has an additional blast shield inside. The fuse is the US made and is guaranteed to protect you if needed.

If you decide to get the package that contains all the probes you will not regret it. The probes are made of very good, high-quality material and are engulfed with rubber that looks and feels very assuring when it comes to safety.

The screen of the Fluke 179 model comes with a powerful backlight that can be toggled on and off on its own separate button.

The multimeter can measure in auto and manual range which can be manually toogled during or before any actual measuring is done. You can set the manual measuring mode into six or ten decimal places.

Scroll down to keep reading or watch this video:

One very notable feature of the Fluke 179 multimeter is the ‘true root mean squared’ feature for measuring the voltage that can come in handy if you need the results that are as precise as possible.

The highlights of the Fluke 179 model are definitely its temperature measuring function, quality test leads (if you decide to get the package that contains them) and its high safety and resistance to falls.

I found only one downside that we can reasonably not like if we take into account the price of this multimeter and that is the number of functions. Fluke 179 has the ability to measure only basic functions and temperature. Even this one downside can be forgiven when you realise with how much precision and safety this multimeter measures the functions that it can measure.