Just like the multimeters, Clamp meters are also measuring instruments, although they are different. They are built-in clamp and are used mostly by electricians. The clamp meter function also as multimeters, it can take measurements of voltage, current, resistance, capacitance, conductance, inductance, temperature, and some can also measure duty cycle, decibels, and frequencies. Even though the clamp meter can be used to check voltage, it is designed to be a current-measuring tool. The clamp attached to it makes it capable of taking readings of currents without having to disconnect or expose the wire.

Instead of using multimeters for testing high voltage or high current systems, clamp meters are recommended. Although there might be some slight problems with testing lower currents in that you may have to wrap the conductor around the wire several, so your reading would be accurate.

Now that we have established what a clamp meter is used for, if you are thinking of purchasing a one, you should know that there are several brands of the device, but I would like to talk about the Fluke 323 and Fluke 324 by comparing them.

They are both valuable clamp meters and both of them might be satisfying, but do you want to know the difference between them and how they both function? Stick around!

Both clamp meters are produced by Fluke and are also categorized as both the 320 series clamp meters, which may cause them to have a lot of similarities. So to make the difference more viewable, we would begin this comparison by tabling some significant features of the Fluke 323 and the Fluke 324.

Let’s break it down

Now let us have a brief breakdown of the comparison. We would explain the essential features of the clamp meter, and give a summary of how the both perform, their similarities and also their differences.

The category rating of a clamp meter would determine the safety of the device and how they react to spikes in voltage, devices with higher category rating can measure more dangerous levels of electricity. 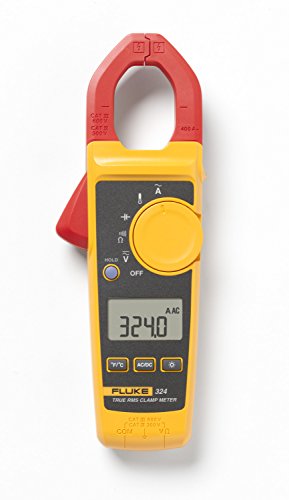 Both the Fluke 323 and Fluke 324 clamp meters are designed to take measurements in tough environments with CAT III 600V / CAT IV 300V rating.

A true root means square Clamp meter would measure Current AC and Voltage AC on non-linear signals. For the true RMS of both the Fluke 323 and Fluke 324 clamp meters you also get a fairly accurate reading while measuring alternating current.

They can measure both sinusoidal and non-sinusoidal waves, making them give results more accurately than other measuring devices without the True RMS.

Measuring current is how you determine the flow of electricity through a conductor. Like we have mentioned earlier, clamp meters are current measuring tools.

Fluke 323 and Fluke 324 are similar to each other in that; they do not measure direct current and they both measure alternative current up to 400 amps.

Voltage is the force that drives the electric current through the conductor. The maximum voltage both the Fluke 323 and Fluke 324 clamp meters measure is another similarity between them.

They can measure AC and DC voltage up to 600 Volts, which may seem fair for multimeters, but since clamp meters are not explicitly built to measure voltage, it is good quality.

Resistance shows the level of opposition the conductor or device you are testing gives to the flow of current. Fluke 323 and Fluke 324 both measure resistance of 4000 ohms.

Some clamp meters can be used to measure the number of occurrences, but one of the features both the Fluke 323 (check the price on Amazon.com) and Fluke 324 (see product pictures on Amazon.com) don’t have is frequency. They are not designed to have inbuilt frequency meters.

A continuity test is performed to check for the complete flow of current through a conductor. Fluke 323 clamp meter can test the continuity of a 70 ohms conductor or below it, while the Fluke 324 can test 30 ohms or below.

Another difference between both clamp meters is that unlike the Fluke 324, Fluke 323 is a not built-in thermometer device. Fluke 324 clamp meter gives temperature readings in both Celsius and Fahrenheit. It can also measure temperature between -10.0°C/ 14.0°F and 400.0°C/ 752.0°F.

The backlight is an additional feature the Fluke 324 has over the Fluke 323 that would enable an electrician use this clamp meter conveniently dark or low light places.

As expected, Fluke would always manufacture reliable devices, but one disadvantage of both the Fluke 323 and Fluke 324 clamp meter is that you can measure resistance only up to 4000 ohms, which limits their usage to testing only basic circuits and not the complex ones with high resistance.

The Fluke 323 clamp meter is small enough to be used in tight places, apart from that, there is no extra fanciness, it is a clamp meter with only the essential functions. The Fluke 324 clamp meter is slim; it is designed with a backlight that makes taking measurements in tight and dark places easy. It also has other measuring capabilities like temperature and capacitance.