Impact wrenches are always going to be needed by home mechanics and DIYers. Faster than the torque wrench, they make quick loosening and tightening actions on car lug nuts. The impact wrenches could be the main tool when you want to get the lawn mower blade off or tighten a long screw into wood. They do most of the functions that a regular ratchet or cordless drill won’t.

Well, we are sure you get the picture!

The top impact wrenches have great torque and still gives a continuous operation. Amidst the top picks, we have chosen our discussion to be on NitroCat 1200-K and AIRCAT 1150.

If you did not know, NitroCat 1200-K is produced by KevlarTM, which is a trademark or IE DuPont Nemours and Company. Also, both NitroCat 1200-K and AIRCAT 1150 are used by National Hot Rod Association Top Fuel race teams.

Although both models not poorly manufactured, they each have additional benefits of their own, which is why we would give a full review, comparing both models with each other including their pros and cons to decide on which impact wrench wins.

Let’s proceed with a review on each one of these models. 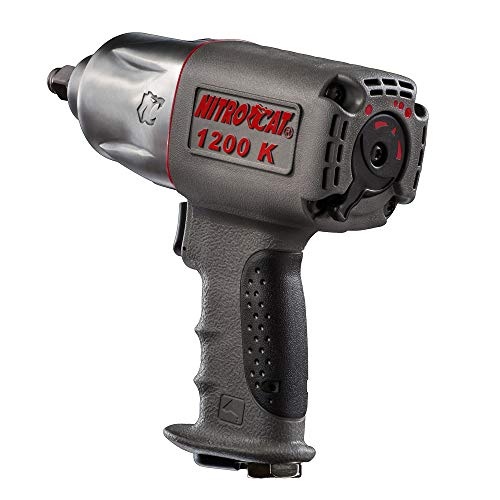 The NitroCat 1200-K is a powerful wrench explicitly designed for heavy-duty work, built with a maximum torque of 1295 ft-lbs and a working torque that ranges between 200 to 900 lbs.

Rather than the other 80 to 100 lbs tools, we recommend you purchase the Nitro 1200-K with a heavy focus duty rather than tire shops. This level of torque is high and can over-tighten nuts, twists off studs, and if the lug nuts are not equally tightened, it can cause brake rotors to warp.

At a rate or 950 blows per minute, NitroCat 1200-K is slower than Aircat 1150, and instead of a twin clutch, NitoCat has a twin clutch. The NitroCat 1200-K has an ergonomic handle for comfort and a large flip lever directly at the back of the tool to switch from forward to reverse for tightening or loosen operations.

For an impact wrench with all these power NitroCat, 1200-K is a still a very quiet machine running at 86 to 89 decibels. The design of the tool is to send the exhaust out through the handle instead of the user’s face which helps to reduce the noise and stay under the Occupational Safety and Health Administration (OSHA) maximum limit of 90 dB for an 8-hour workday.

The Kevlar housing of the NitroCat is renowned for durability. It weighs and measures 4.5 pounds and 8.25 inches respectively. The tool uses a 3/8” hose that runs on 90-120 pound per square inch, allowing it to consume only four cubic feet per minute of air during usage.

One of the attractive feature of NitroCat 1200-K which makes it a top rated impact wrench is that if the tool ever has a leaking problem, you can fix it with a plain old non-detergent 5W30 motor oil. The NitroCat 1200-K does not require any special oil or expensive grease; it is just a regular tool that you can lubricate through the air inlet after you are done with the day’s job.

The NitroCat 1200-K has a better design than the AirCat 1150. The sockets do not slip unless they are worn out from the use, but you get to enjoy a two-year warranty after purchase where you can rebuild your tool when your warranty expires. 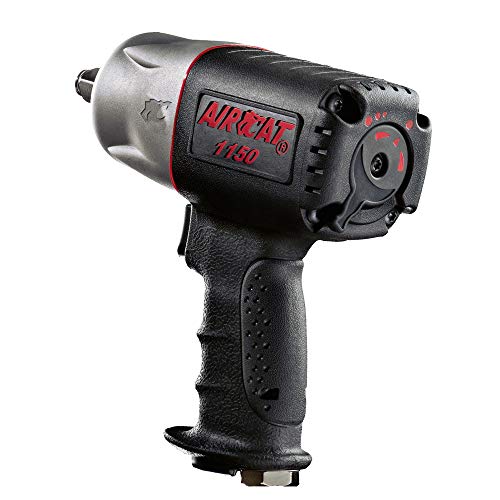 For an all-around automotive work, AIRCAT is one of the best impact wrenches you can get. It has a twin hammer design that rates faster than NitroCat at 1400 hits per minutes. Being a top rank tool amidst other impact wrenches, AIRCAT has an impressive hammer speed of 1,400 blow per minute.

Just like NitroCat 1200-K, AIRCAT 1150 runs on maximum torque of 1295 ft-lbs, good enough to handle loosening of tough bolts. And a regular working torque of 200-950 ft-lbs which would require careful handling as it is too much for the lug nuts on tires of ordinary cars and the likes.

Even while you have your work gloves on, you can choose to forward or reverse the action without disrupting the power. While you aim to loosen or to tighten your screw with this tool, all you do is flip the big leaver on the back and the operation switches.

One cool feature of the AIRCAT 1150 is that there are three sets, so you can set the right amount you want on the tightening. It weighs 4.5 pounds and has a body made from composite aluminum. The ergonomically designed handle of this unit is easy to grip.

The same way NitroCat 1500-K is made to have the exhaust away from the operator’s face, AIRCAT 1150 is routed via the handle.

The AIRCAT 1150 is assembled in the US and also as quiet as NitroCat 1500-K with a sound rate at 86-89 decibels, which is also under the OSHA recommendation for a safe to work environment. This tool uses a ¼” NPT connector that runs on 90 to 120 pound per square inch, so it can consume more than NitroCat 1200-K with 4.3 cubic feet per minute while it is being operated.

The two-year warranty covers the parts and labor alone, but you have to lubricate as often as every few weeks. There is a lubricating kit sold by AIRCAT that you can use for your tool, but lithium or bearing grease also works well. When other tools develop faults, they are sent back to the factory; the AIRCAT 11500 can be rebuilt instead.

Most users of this tool have found any real complaint about its performance, but the only problem you may have to look out for is the anvil that does not always secure the socket well. But there is a way around it, what you have to do is put a small piece of paper over the drive mechanism as you plug the socket in to add extra dimension and hold it firmly on one place.

Most of the recent cordless models of impact wrenches are designed to be more powerful and last longer than the previous ones so that you can have a powerful and more portable device.

Amidst the many brands in the market, both NitroCat 1200-K and AIRCAT 1150 are top rated impact wrenches manufactured to meet the basic requirement of commercial users. They are built with a drive mechanism that can handle heavy workloads and take a few hard knocks without frequent overhauls.

In conclusion, if you want to pick one of this tool specifically for heavy duty work, the framework of NitroCat 1200-K qualifies it to be your best option. It has high torque and would be a bad idea for a regular tire shop. NitroCat is cheaper to maintain, all you need is a 5W30 motor oil of it leaks.

Compared to NitroCat 1200-K, AIRCAT 1150 is slower, but it is a powerhouse and can get a stuck, rusted bolt out. As we have mentioned above, AIRCAT 1150 is faster than NitroCat 1200-K. It is an all-around automotive tool featuring the most powerful twin hammer impact wrench that you can find in the market. Other considerable impact wrenches with excellent reputations are Ingersoll and Snap-On.